Warning: Wireless charging can affect the operation of an implanted pacemaker or other medical devices. If you have one, it is recommended to consult with your doctor before using the wireless charging system.

The vehicle must be on or in ACC/ ACCESSORY, or Retained Accessory Power (RAP) must be active. The wireless charging feature may not correctly indicate charging when the vehicle is in RAP.

Warning: Remove all objects from the charging pad before charging your compatible smartphone. 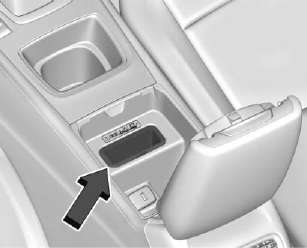 To charge a compatible smartphone:

on the infotainment display. This indicates that the smartphone is properly positioned and charging. If a smartphone is inserted into the pocket and