Warning: Never leave a child, a helpless adult, or a pet alone in a vehicle, especially with the windows closed in warm or hot weather.

They can be overcome by the extreme heat and suffer permanent injuries or even death from heat stroke. 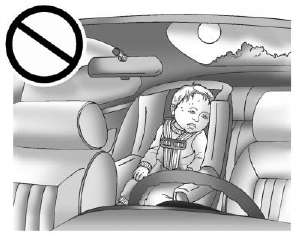 The vehicle aerodynamics are designed to improve fuel economy performance. This may result in a pulsing sound when either rear window is down and the front windows are up. To reduce the sound, open either a front window or the sunroof, if equipped.

Warning: Children could be seriously injured or killed if caught in the path of a closing window. Never leave the Remote Keyless Entry (RKE) transmitter in a vehicle with children. When there are children in the rear seat, use the window lockout switch to prevent operation of the windows. 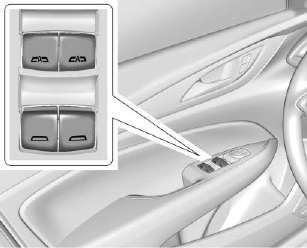 The power windows work when the ignition is on, in ACC/ACCESSORY, or when Retained Accessory Power (RAP) is active. Using the window switch, press to open or pull to close the window.

The windows may be temporarily disabled if they are used repeatedly within a short time.

This feature stops the rear passenger window switches from working.

All windows can be opened without holding the window switch. Press the switch down fully and quickly release to express open the window.

If equipped, pull the window switch up fully and quickly release to express close the window.

Briefly press or pull the window switch in the same direction to stop that window's express movement.

The express-close feature will reverse window movement if it comes in contact with an object.

Extreme cold or ice could cause the window to auto-reverse. The window will operate normally after the object or condition is removed.

Warning: If automatic reversal system override is active, the window will not reverse automatically. You or others could be injured and the window could be damaged.

Before using automatic reversal system override, make sure that all people and obstructions are clear of the window path.

When the engine is on, override the automatic reversal system by pulling and holding the window switch if conditions prevent it from closing.

Programming may be necessary if the vehicle battery has been disconnected or discharged. If the window is unable to express-close, program each express-close window:

2. Turn the ignition on or to ACC/ ACCESSORY.

3. Partially open the window to be programmed. Then close it and continue to pull the switch briefly after the window has fully closed.

4. Open the window and continue to press the switch briefly after the window has fully opened. 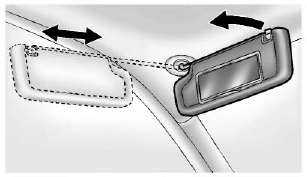 Pull the sun visor down to block glare. Detach the sun visor from the center mount to pivot to the side window and, if equipped, extend along the rod.

More about «Keys, Doors, and Windows»: