Warning: Do not use the system if there are people in the vehicle! The doors cannot be unlocked or opened from the inside.

The vehicle is equipped with a deadbolt locking feature in addition to the standard door locks.

The deadbolt is engaged whenever

on the RKE transmitter is pressed twice within five seconds with all doors closed and the vehicle off.

The deadbolt lock can also be engaged with the Keyless Access system.

When the doors are secured with the deadbolt, they cannot be unlocked or opened using the controls or handles inside the vehicle.

on the transmitter once to open the deadbolt and unlock the driver door. Pressing

again within five seconds will unlock all of the doors. 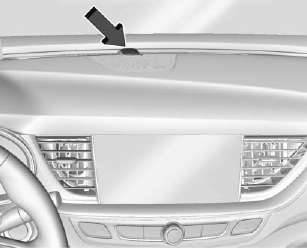 The indicator light, on the instrument panel near the windshield, indicates the status of the system:

Off : Alarm system is disarmed.

On Solid : Vehicle is secured during the delay to arm the system.

A door, the hood, or the liftgate is open, or there is a system fault.

1. Close the liftgate and the hood.

Turn off the vehicle.

2. Lock the vehicle in one of three ways:

on the RKE transmitter a second time will bypass the 30-second delay and immediately arm the alarm system.

The vehicle alarm system will not arm if the doors are locked with the key.

If the driver door is opened without first unlocking with the RKE transmitter, the horn will chirp and the lights will flash to indicate pre-alarm. If the vehicle is not started, or the door is not unlocked by pressing

on the RKE transmitter during the 10-second pre-alarm, the alarm will be activated.

If a door, the hood, or the liftgate is opened without first disarming the system, the turn signals will flash and the horn will sound for about 30 seconds. The alarm system will then re-arm to monitor for the next unauthorized event.

Do one of the following to disarm the alarm system or turn off the alarm if it has been activated:

To avoid setting off the alarm by accident:

Unlocking the driver door with the key will not disarm the system or turn off the alarm.

How to Detect a Tamper Condition

is pressed on the RKE transmitter and the horn chirps three times, an alarm occurred previously while the alarm system was armed.

If the alarm has been activated, a message will appear on the DIC.