If equipped, these buttons are in the overhead console.

This system can replace up to three remote control transmitters used to activate devices such as garage door openers, security systems, and home automation devices. These instructions refer to a garage door opener, but can be used for other devices.

Read these instructions completely before programming the Universal Remote system. It may help to have another person assist with the programming process.

Keep the original hand-held transmitter for use in other vehicles as well as for future programming.

Erase the programming when vehicle ownership is terminated.

Make sure the hand-held transmitter has a new battery for quick and accurate transmission of the radio-frequency signal.

Programming involves time-sensitive actions, and may time out causing the procedure to be repeated.

To program up to three devices:

2. At the same time, press and hold both the hand-held transmitter button and one of the three Universal Remote system buttons to be used to operate the garage door. Do not release either button until the indicator light changes from a slow to a rapid flash. Then release both buttons.

Some garage door openers may require substitution of Step 2 with the procedure under "Radio Signals for Canada and Some Gate Operators" later in this section. 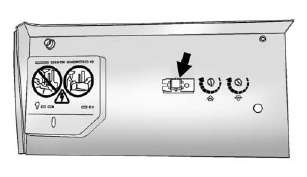 4. After completing Steps 1-3, locate the Learn or Smart button inside the garage on the garage door opener receiver.

The name and color of the button may vary by manufacturer.

5. Press and release the Learn or Smart button. Step 6 must be completed within 30 seconds of pressing this button.

Again, if the door does not move or the garage door lamp does not flash, press and hold the same button a third time for two seconds, then release it.

The Universal Remote system should now activate the garage door.

Repeat the process for programming the two remaining buttons.

Radio Signals for Canada and Some Gate Operators

Canadian radio-frequency laws and some U.S. gate operators require transmitter signals to time out or quit after several seconds of transmission. This may not be long enough for the Universal Remote system to pick up the signal during programming.