The vehicle may be equipped with a fuel saving Stop/Start system to shut off the engine and help conserve fuel. 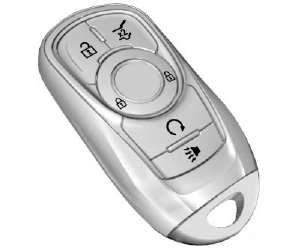 The Remote Keyless Entry (RKE) transmitter may work up to 60 m (197 ft) away from the vehicle.

: Press to lock all doors, the fuel door, and the liftgate.

: Press and release one time to initiate the vehicle locator. The exterior lamps flash and the horn chirps three times.

for at least three seconds to sound the panic alarm. The horn sounds and the turn signals flash for about 30 seconds or until

is pressed again or the vehicle is started.

: If equipped, press and release

and then immediately press and hold

for at least four seconds to start the engine from outside the vehicle using the RKE transmitter.

: If equipped, press twice to open the liftgate.

If equipped, the engine can be started from outside of the vehicle.

on the RKE transmitter.

for at least four seconds or until the turn signal lamps flash.

Start the vehicle normally after entering.

When the vehicle starts, the parking lamps will turn on.

Remote start can be extended.

To cancel a remote start, do one of the following: