This section describes how to use seat belts properly, and some things not to do.

Warning: Do not let anyone ride where a seat belt cannot be worn properly.

It is extremely dangerous to ride in a cargo area, inside or outside of a vehicle. In a collision, passengers riding in these areas are more likely to be seriously injured or killed. Do not allow passengers to ride in any area of the vehicle that is not equipped with seats and seat belts.

Always wear a seat belt, and check that all passenger(s) are restrained properly too.

This vehicle has indicators as a reminder to buckle the seat belts. 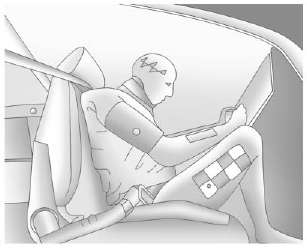 When riding in a vehicle, you travel as fast as the vehicle does. If the vehicle stops suddenly, you keep going until something stops you.

It could be the windshield, the instrument panel, or the seat belts! When you wear a seat belt, you and the vehicle slow down together.

There is more time to stop because you stop over a longer distance and, when worn properly, your strongest bones take the forces from the seat belts. That is why wearing seat belts makes such good sense.

Questions and Answers About Seat Belts

Q: Will I be trapped in the vehicle after a crash if I am wearing a seat belt?

A: You could be- whether you are wearing a seat belt or not. Your chance of being conscious during and after a crash, so you can unbuckle and get out, is much greater if you are belted.

Q: If my vehicle has airbags, why should I have to wear seat belts?

A: Airbags are supplemental systems only. They work with seat belts- not instead of them.

Whether or not an airbag is provided, all occupants still have to buckle up to get the most protection.

Also, in nearly all states and in all Canadian provinces, the law requires wearing seat belts.

More about «Seats and Restraints»: