If equipped, the sunroof only operates when the ignition is on or in ACC/ACCESSORY, or when Retained Accessory Power (RAP) is active. 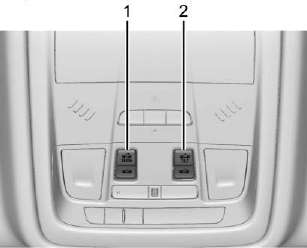 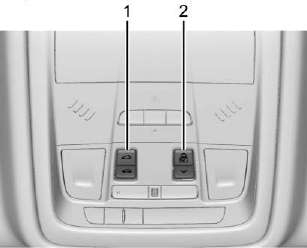 The vehicle may have one of two different switch configurations.

(1) to the first detent to open the sunroof. Press

(1) to the second detent and release to express-open the sunroof. Press

(1) to the second detent and release to express-close. To stop the movement, press the switch again.

If an object is in the path of the sunroof while it is closing, the automatic reversal feature will detect the object and stop the sunroof. The sunroof will then return to the full-open or vent position.

(2) to vent the sunroof. Press

(2) to close the sunroof vent.

If equipped with a manual sunshade, slide the sunshade to open or close it. The sunshade is always open when the sunroof is open.

(2) to open the power sunshade. Press

(2) to close the power sunshade.

The sunroof cannot be opened or closed if the vehicle has an electrical failure. Have the system initialized by your dealer.

The sunroof has an automatic reversal system that is only active when the sunroof is operated in express-close mode.

If an object is in the path while express- closing, the reversal system will detect an object, stop, and open the sunroof again.

If frost or other conditions prevent closing, override the feature by closing the sunroof in manual mode.

To stop movement, release the switch. 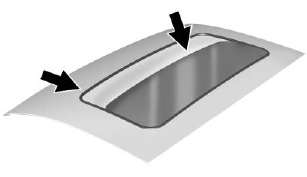 Dirt and debris may collect on the sunroof seal or in the track. This could cause an issue with sunroof operation or noise. It could also plug the water drainage system.

Periodically open the sunroof and remove any obstacles or loose debris. Wipe the sunroof seal and roof sealing area using a clean cloth, mild soap, and water. Do not remove grease from the sunroof.

More about «Keys, Doors, and Windows»: