If equipped, the message REAR SEAT REMINDER LOOK IN REAR SEAT displays under certain conditions indicating there may be an item or passenger in the rear seat. Check before exiting the vehicle.

There will be an alert when the vehicle is turned off. The alert does not directly detect objects in the rear seat; instead, under certain conditions, it detects when a rear door is opened and closed, indicating that there may be something in the rear seat.

The feature is active only once each time the vehicle is turned on and off, and will require reactivation by opening and closing the second row doors. There may be an alert even when there is nothing in the rear seat; for example, if a child entered the vehicle through the rear door and left the vehicle without the vehicle being shut off.

1. Place the front seatbacks in the upright position. 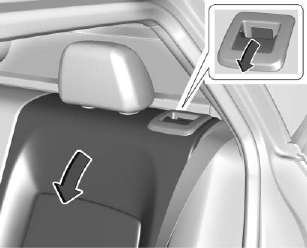 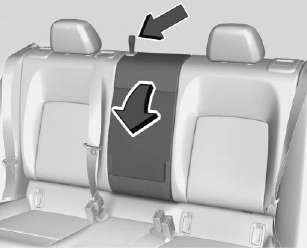 5. Verify the seat is locked in the folded position by pushing down on the seatback.

6. Repeat the steps for the other seatback, if desired. 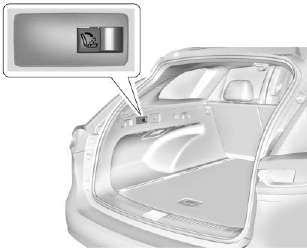 The rear seatbacks can also be folded forward by pulling the levers on either side of the rear cargo area.

Warning: If either seatback is not locked, it could move forward in a sudden stop or crash. That could cause injury to the person sitting there.

Always push and pull on the seatbacks to be sure they are locked.

Warning: A seat belt that is improperly routed, not properly attached, or twisted will not provide the protection needed in a crash. The person wearing the belt could be seriously injured. After raising the rear seatback, always check to be sure that the seat belts are properly routed and attached, and are not twisted.

To raise the seatback:

1. Push the seatback rearward until it locks in the upright position.

2. Make sure the rear seat belts are in the belt guide and are not twisted or caught between the seat cushion and the seatback.

More about «Seats and Restraints»: