When a frontal collision seems likely, the system attempts to lessen vehicle’s damage. Two types of pre-collision system are available.

Based on the speed and amount of the driver’s braking operation, the system determines if emergency braking is being performed. If this determination is made, the seat belts are immediately retracted to increase the effectiveness of the pretensioners . In addition, the system also operates if the driver loses control of the vehicle.

The same will happen if the driver makes an emergency braking or loses control of the vehicle. However, when the VSC system is disabled, the system will not operate in the event of skidding.

When there is a high possibility of a frontal collision, the system applies greater braking force in relation to how strongly the brake pedal is depressed. 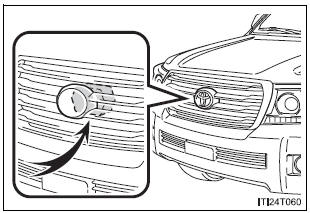 Detects vehicles or other obstacles on or near the road ahead and determines whether a collision is imminent based on the position, speed, and heading of the obstacles.

When the system is activated in the situations described above there is also a possibility that the seat belts will retract quickly and the brakes will be applied with a force greater than normal. When the seat belt is locked in the retracted position, stop the vehicle in a safe place, release the seat belt and refasten.

When a malfunction occurs due to sensor contamination, etc. that results in the sensors being unable to detect obstacles, the pre-collision system will be automatically disabled. In this case, the system will not activate even if there is a collision possibility.

Warning lights and/or warning messages will turn on or flash.

This device complies with part 15 of the FCC Rules. Operation is subject to the following two conditions: (1) This device may not cause harmful interference, and (2) this device must accept any interference received, including interference that may cause undesired operation.

Changes or modifications not expressly approved by the party responsible for compliance could void the user’s authority to operate the equipment.

This equipment should be installed and operated with minimum distance of 20 cm between the radiator (antenna) and your body.

This transmitter must not be co-located or operating in conjunction with any other antenna or transmitter.

More about «Using other driving systems»: