The LATCH system secures a child restraint during driving or in a crash.

Booster seats use the vehicle's seat belts to secure the child and the booster seat. If the manufacturer recommends that the booster seat be secured with the LATCH system, this can be done as long as the booster seat can be positioned properly and there is no interference with the proper positioning of the lap-shoulder belt on the child.

Child restraints built after March 2014 will be labeled with the specific child weight up to which the LATCH system can be used to install the restraint.

The following explains how to attach a child restraint with these attachments in the vehicle.

Not all vehicle seating positions have lower anchors. In this case, the seat belt must be used (with top tether where available) to secure the child restraint. 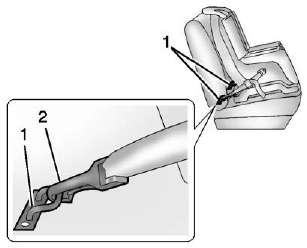 Lower anchors (1) are metal bars built into the vehicle. There are two lower anchors for each LATCH seating position that will accommodate a child restraint with lower attachments (2). 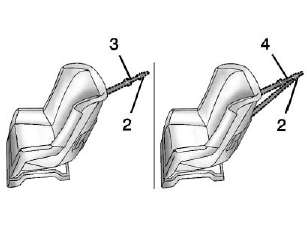 The child restraint may have a single tether (3) or a dual tether (4).

Either will have a single attachment hook (2) to secure the top tether to the anchor. 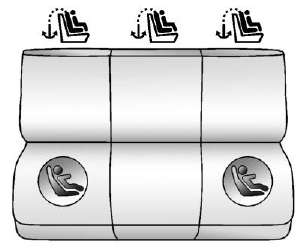 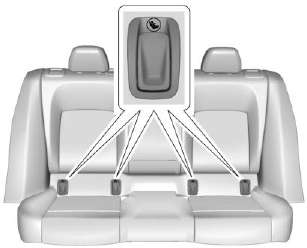 The lower anchors are located under the labeled covers on the seatback near the crease between the seatback and the seat cushion.

Where to Put the Restraint

Securing a Child Restraint Designed for the LATCH System

Securing Child Restraints (With the Seat Belt in the Rear Seat)

Securing Child Restraints (With the Seat Belt in the Front Seat)