The radio wave bands used in radio broadcasting are as follows:

There are great differences in the size of the service area for AM and FM monaural. Sometimes FM stereo broadcasts cannot be received even through AM can be received in very clearly.

Not only does FM stereo have the smallest service area, but it also picks up static and other types of interference ("noise") easily.

Besides the problem of static, there are also the problems called "fading", "multipath" and "fade out". These problems are caused not by electrical noise but by the nature of the radio waves themselves.

(a) Questionnaire for nose: It is very important for noise trouble shooting to have good understanding of the claims from the customers. Refer to the following questionnaire to diagnose the problem accurately.

HINT: In the condition of noise occurrence does not meet any of the above questionnaire, check the problems to "Reception Problem" on the previous page.

(b) Matters that require attention when checking:

(c) Antenna and noise: Electronic signal received by the antenna will reach to the radio transmitting through the core wire of the coaxial cable. Any noise wave other than radio wave is mixed into this core wire, that naturally causes noise in the radio and poor sound quality. In order to prevent the noise from coming into radio, the core wire inside the coaxial cable is covered with a mesh wire called shield wire which transmits the noise to the ground.

Compact Disc Players use a laser beam pick-up to read the digital signals recorded on the CD and reproduce analog signals of the music, etc.

HINT: Never attempt to disassemble or oil any part of the player unit.

Do not insert any object other than a disc into the magazine.

NOTICE: CD players use an invisible laser beam which could cause hazardous radiation exposure. Be sure to operate the player correctly as instructed.

(a) Raise the cassette door with your finger.

Next, using a pencil or similar object, push in the guide.

(b) Using a cleaning pen or cotton applicator soaked in cleaner, clean the head surface, pinch rollers and capstans.

If the disc gets dirty, clean the disc by wiping the surface from the center to outside in the radial directions with a soft cloth.

NOTICE: Do not use a conventional record cleaner or anti-static preservative.

(a) What is AVC-LAN? AVC-LAN is the abbreviation, which stands for Audio Visual Communication-Local Area Network.

This is a unified standard co-developed by 6 audio manufactures associated with Toyota Motor Corporation.

(b) Objectives Recently the car audio system has been rapidly developed and functions have been changed drastically.

The conventional system has been switched to the multi-media type such as a navigation system.

At the same time the level of customers needs to audio system has been upgraded. This lies behind this standardization.

The concrete objectives are explained below.

(c) The above descriptions are the objectives to introduce AVC-LAN. By this standardization, development of new products will no longer cause systematic errors. 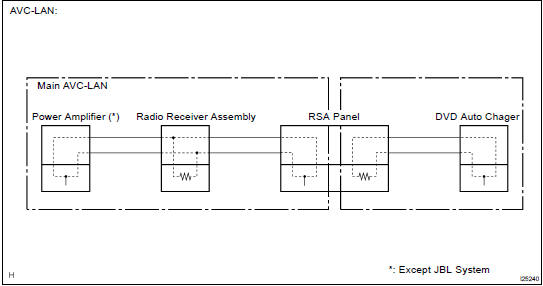