The system sounds the alarm and flashes lights when forcible entry is detected.

The alarm is triggered in the following situations when the alarm is set:

Close the doors and hood, and lock all doors.

The system will be set automatically after 30 seconds.

The indicator light changes from being on to flashing when the system is set.

Do one of the following to deactivate or stop the alarm.

The vehicle has a maintenance-free type alarm system.

To prevent unexpected triggering of the alarm and vehicle theft, make sure of the following.

The alarm may be triggered in the following situations.

Be sure to cancel the alarm system. 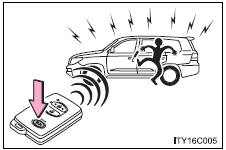 is pressed for longer than about one second, the headlights/tail lights/emergency flashers will flash, the front and rear interior lights will come on, and an alarm will sound for about 60 seconds to deter any person from trying to break into or damage your vehicle.

To stop the alarm, press any button on the wireless remote control.